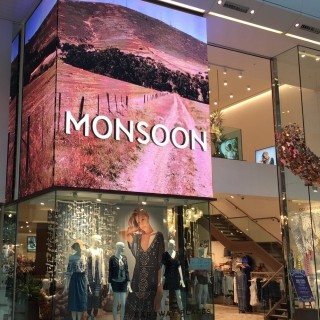 As one of the UK’s most experienced AV integrators, PAI was invited to apply its 30+ years of capability, industry knowledge and expertise to provide a cutting edge digital display scheme for a new flagship store at Westfield, White City in the heart of London – Monsoon’s first implementation of digital displays.

Appointed after successfully completing a number of earlier projects for sister brand Accessorize, PAI were given another challenging brief. The client was keen to include strategic digital elements, but in particular it was pivotal that the store boasted an extraordinary digital façade.

Previously occupied by another retailer, the vacated unit featured a large, five metres wide by five metres tall cube shaped structure, that had been clad with a reflective finish. Monsoon’s design team aspired to transform this into a high impact, engaging, branded display, featuring digital content on three sides. Design intent for the project was that this would become an iconic digital feature of sheer scale.

PAI suggested and specified RGB LED tiles ahead of projection, due to the inherent ambient light levels in the shopping centre, as well as the associated running and maintenance costs of high brightness projectors. The chosen products are also front installed and maintained – a key factor in PAI’s specification.

The design process involved the creation and submittal of detailed drawings, product dimensions and weights, as PAI worked closely with the client’s own in house team. A small scale mock up demonstration was also implemented for Monsoon’s senior stakeholders. Proactive project coordination was essential so that PAI could advise how best to make minor alterations to the existing structure to affix the LED tiles.

A further critical requirement was that Monsoon’s signage company needed to be able to install a standard illuminated store front sign to the front face of the ‘cube’. As this could not be fitted directly to the tiles behind, PAI suggested, then subsequently liaised with the signage contractor to design a bespoke fixing solution to sit behind, and pass between the LED tiles. The minimal gap is masked with a chrome infill, which is all but invisible to passers-by.

Monsoon’s design team also identified key areas for digital content to be displayed across the store’s interior. PAI worked closely with designers Blas to integrate correctly sized products into the key areas identified, ensuring that all digital screens were integrated seamlessly. Working in collaboration with construction contractors, 29 internal displays were installed across the two floors well ahead of store completion, in some case working to tolerances of just 1mm in terms of fit.

The installation of the LED tiles proved somewhat more challenging. Given the lead time on manufacture, shipping and delivery, just three days were available to install 120 units with local media players, working alongside other contractors. Undaunted by this complexity and tight timescale, PAI’s installation team worked consistently over this period.

Thus, as the store hoarding came down on the night before the official opening, the completed LED tile façade was visible for all to see, ready for a successful launch the following morning.